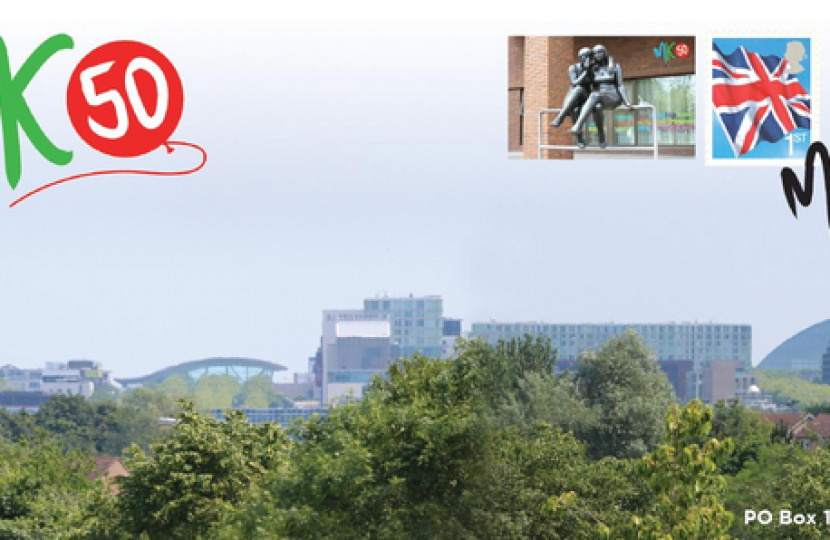 In a letter addressed to 10 Downing Street the MPs write:

“Milton Keynes continues to be one of Britain’s fastest-growing cities. It has produced exceptional talent, including London 2012 Olympic gold medalist Greg Rutherford; established the Open University in 1969, making higher education more accessible to everyone, regardless of geography and it is the centre for transport technology in England, as the home of the Transport Systems Catapult, with the first trials of driverless cars taking place on Milton Keynes’ streets.”

“As we celebrate 50 years of Milton Keynes we would like to present you with a memento of the most successful, ambitious, diverse, tolerant, determined and hardworking city (well it should be! [have city status]) in the UK.”

The Prime Minister will receive a set of stamps that depict ‘The Whisper’ by André Wallace which sits outside the library in CMK.

The MPs have also extended an invitation to the PM to visit and join the 50th celebrations later in the year.

There are range of four commemorative stamps to celebrate Milton Keynes 50th birthday and the city’s public art. Licenced by the Royal Mail, the stamps show the famous Concrete Cows by artist Liz Leyh, the regularly passed-by sculpture, O Wert Thou in the Cauld Blast by Ronald Rae at Station Square, the memorable The Whispers bronze statue perched outside Milton Keynes’ Central Library, and lastly Willen Lake’s Peace Pagoda, the first to be built in the Western World.