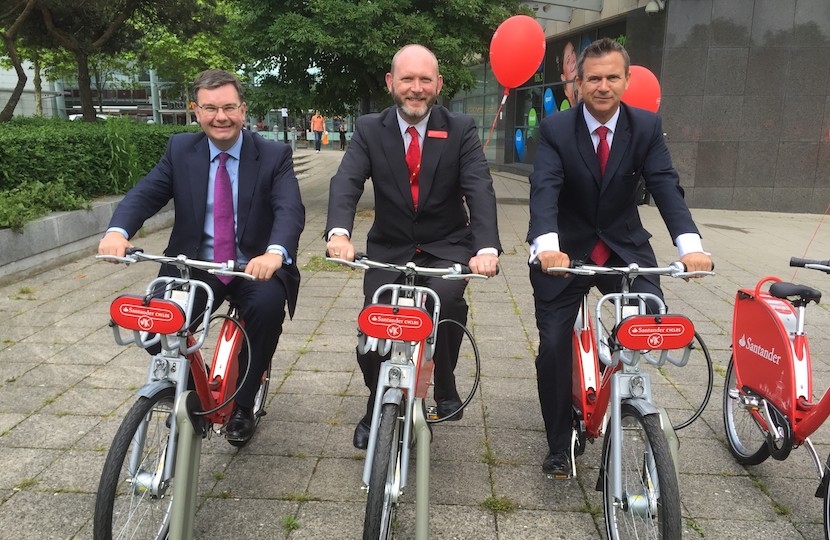 MK’s very own cycle hire scheme has recently launched with 300 Santander bicycles being made available to hire around the city in a scheme known as Santander Cycles MK.

The bikes, which have the technology built in to the frame rather than the docking stations like in London, will be available from 42 locations across Milton Keynes, with more bikes and docking stations to be introduced later in 2016.

City MPs Iain Stewart and Mark Lancaster went to the launch and are hopeful the new scheme will see hundreds of new cyclists across MK.

Iain Stewart who is also on the Transport Committee said, “I am delighted to see the new Santander Cycles MK scheme being launched. We are very lucky in Milton Keynes to have ready built red ways, which many towns don’t, but yet we cycle much less than a lot of those places. Hopefully this can be a game changer and we will see more people taking to two wheels, whether it be to commute to work or just for nice bike ride at the weekends.”

Milton Keynes North MP Mark Lancaster added, “Cycling is a fantastic and a reasonably cheap way of getting to work, keeping fit and socialising. As Iain says, for too long we haven’t utilised the red way as much as we should so hopefully with this new incentive in place, we will now see more people make use of the ready-made infrastructure in the city.”

Mark Richards, Santander Branch Manager, Milton Keynes, said: “We’re really excited about the launch of the new Santander Cycles MK scheme. To date we have had over 4,000 people pre-register to use the cycles which is really encouraging. A cycle hire scheme is an affordable and accessible way to provide local mobility as well as being healthy and socially responsible.”