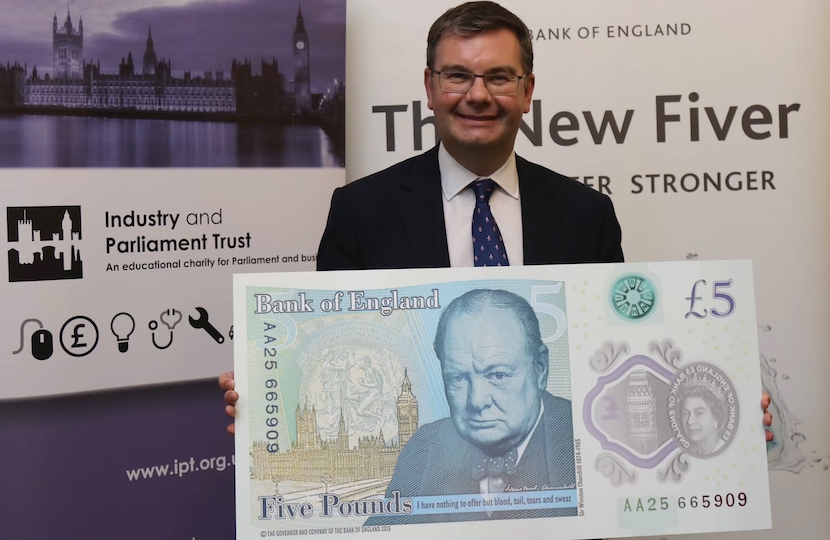 Iain joined the Chief Cashier and members of the Bank of England team in Parliament to learn more about the New Fiver before it is issued on 13 September. Iain was able to try out the new security features and find out how local businesses and the public in Milton Keynes can prepare for the new note.

The new Bank of England £5 note features former Prime Minister Sir Winston Churchill and will be made of polymer, a thin flexible plastic. This means that the note is cleaner, safer and stronger. The introduction of polymer banknotes allows for a new generation of security features which make it even harder to counterfeit. The note also remains in much better condition for longer, and The New Fiver is expected to last at least 2.5 times longer than paper notes – around 5 years.

Iain  said: “The New Fiver will begin making its way into cash machines and shop tills from 13 September. Paper £5 notes will be gradually withdrawn once the New Fiver enters circulation and will cease to be legal tender in May 2017, up until then everyone can carry on spending paper £5 notes as usual.”

A new polymer £10 note, featuring the novelist Jane Austen, will be issued in summer 2017 and a new polymer £20 note featuring the artist JMW Turner will enter circulation by 2020. These notes will include a tactile feature to help the vision impaired people distinguish between denominations. The New Fiver will be distinguishable through its absence of a tactile feature.

Readers can see the New Fiver online at www.thenewfiver.co.uk or at one of the Bank of England’s regional roadshow events around the UK.